I am trying to add AP7155 meters to the Map view and use the value of Watts displayed on the Icon.

I have checked the Watts sensor is available from the AP7155 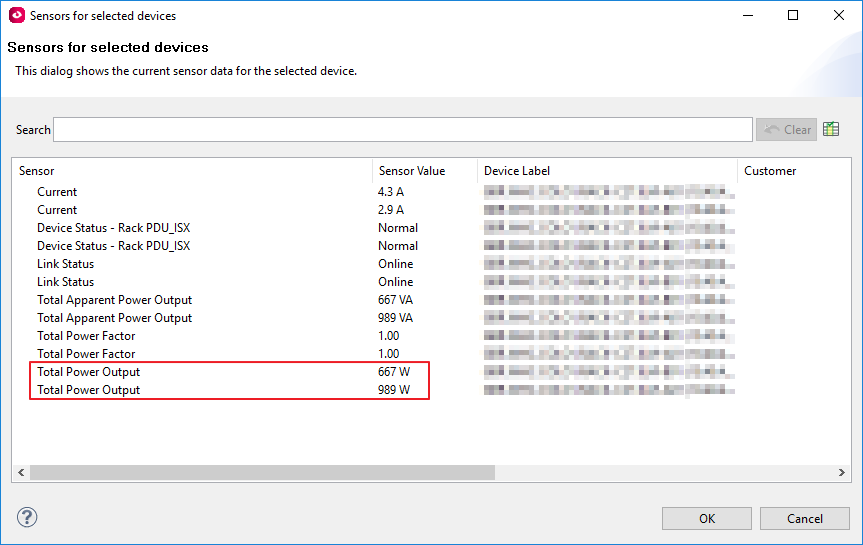 But it is not available in the Custom Label Settings when editing the map.

Interestingly I can create a Virtual sensor using 2x AP7155 to show total Watts and it seems to work OK.

I don't have the AP7155 to test at this moment but the devices I do have show power as an optional custom configuration. Looking at your screenshots, it appears that you have (2) total power output sensors, one of which is available under your custom label settings.

The fact that you can see both when viewing the sensors makes me believe it is not specifically a DDF issue. I am wondering though if this is a solo PDU or if it is daisy-chained with a second PDU (network port sharing)?

Hmm, been fighting with this most of the morning, but should have checked one last time before posting!

Previously I had not been able to see the Sensor called Total Power Output, even though I tried on several AP7155's when trying to allocate the watts value to the icon in the map view.

In the end I decided to ask for help on here and while capturing the screen shots I did not see that the sensor Total Power Output was now visible, and posted anyway.

So basically I can see the Total Power Output sensor now and can allocate the Watts value to the icon.

It probably is worth mentioning that I did do a restart of the client before doing the screenshots as a couple of error messages popped up when switching between groups (I did not note what they said and cannot recall it either).  It seems this may have solved my problem but in my frustration I didn't check it before posting...

So all is OK now.  I will post again if it occurs again or the messages come up again.

Let me clarify Garry Priestland question: in his screenshot of the "Sensors for selected devices" window, duplicating sensors are displayed, since he just selected two devices AP7155 with the mouse in the DCE-client window "Device View" and chose the context menu item "View Device Sensors..."

But in the "Custom Label Settings" window only one sensor is displayed, for example, "Total Power Output" (W) as it should be 😀.