Not sure if this is a bug or not, but have noticed that the DCE7.6.0 Synchronised backups fail if you use the compressed option.

It appear that if you create a new backup that is synchronised and compressed it will work for the first time but not for subsequent ones.

The best I can tell is that when the 2nd synchronised backup starts, DCE tries to decompress the backup in its location to add files to it, then to compress it back up again.  On this particular server the backups location had been entered as

It look like this get interpreted by DCE as

(double \\ before backups) but only when trying to access the backup file to decompress it, not when actually performing the initial backup.

Changing the backup location to

(no \ at the start) allowed DCE to start decompressing the backup.

Note that the Test Mount function works regardless of whether the leading \ is included or not.

the next problem is that with large backups the process takes so long that it is not really feasible, so for me, only config backups have been set to compressed. 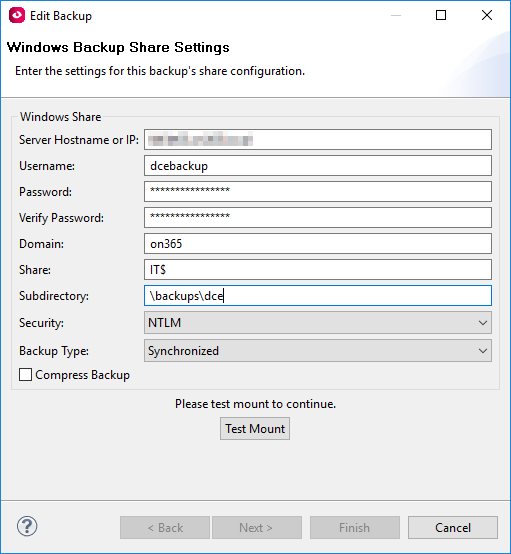