I understand that MODBUS TCP Output Module is a optional add-on and must be purchased prior to use. Before purchasing it, I have a few question about it.

If I understand correctly, DCE MODBUS TCP Output Module is acting as network gateway for third party network management system. For third party network management system to query DCE devices, NMS communicates with DCE with MODBUS protocol and given device's slave ID. I understand one device must have unique slave ID. The question is: can multiple devices (same type of devices) use one same slave ID?

The Modbus output module in DCE is as you know a software module. It does however act similarly to a hardware gateway. Every device you have wired to a gateway would have it's own slave address. In this case, up to 247 slave outputs. The only way DCE can output a series of devices as a single slave ID is if the devices themselves are being monitored by DCE as a single device.

How can DCE monitor a series of devices as a single device?

That's up to the devices themselves. DCE can monitor SNMP. If all devices roll up under the same network card for SNMP, DCE sees them as a single device.

DCE can monitor Modbus (but then you may not need the output module). As is the case above, if the main unit can have other devices roll up underneath and show DCE a single slave, DCE outputs a single slave.

Totally at the mercy of the device there.

Can DCE output module defines a device group (with 200 ATS units under it) as one slave?

As I stated previously:

It does however act similarly to a hardware gateway. Every device you have wired to a gateway would have it's own slave address.

DCE acts like this. Every device has it's own slave address.

Modbus output for SNMP or Modbus in.

Each monitored node is a single output slave address.

The only difference is NetBotz. To make it worse, if you're using NetBotz, each pod is a slave address. That''s fine if you're looking at the bot directly but DCE also breaks the NetBotz up into pods.

How many concurrent TCP/IP connections are supported by DCE between DCE and 3rd party NMS?

As per my initial comments:

Do you think 3rd party NMS can establish 247 concurrent network connections with DCE?

There are no tested limits to the number of network connections to the server. It's all about resources. If you're trying to pull a single register from 100 devices or 100 registers from a single device, the OS will use about the same amount of resources. If you have 100 different modbus systems polling DCE, that may add more overhead to the network and system. The limit to the number of connections or polls of devices is mostly environmental   and will differ from system to system. System resources, number of devices, number of registers, etc are different on every install.

Back to your comments below:

"The Modbus output module in DCE is as you know a software module. It does however act similarly to a hardware gateway. Every device you have wired to a gateway would have it's own slave address. In this case, up to 247 slave outputs. The only way DCE can output a series of devices as a single slave ID is if the devices themselves are being monitored by DCE as a single device"

Is it possible that we request a customized DCE feature which creates a virtual device (representing a number of physical devices) and output the virtual device as a slave ID to 3rd party over the MODBUS output module?

Such a request is not necessary. You can create virtual sensors using either averages (for temperature etc) or totals for other numeric values for APC and/or 3rd party sensors such as watts shown here:

Choose the different sensors (make sure if you're adding sensors, you don't add each outlet in a PDU and then the total for that PDU. 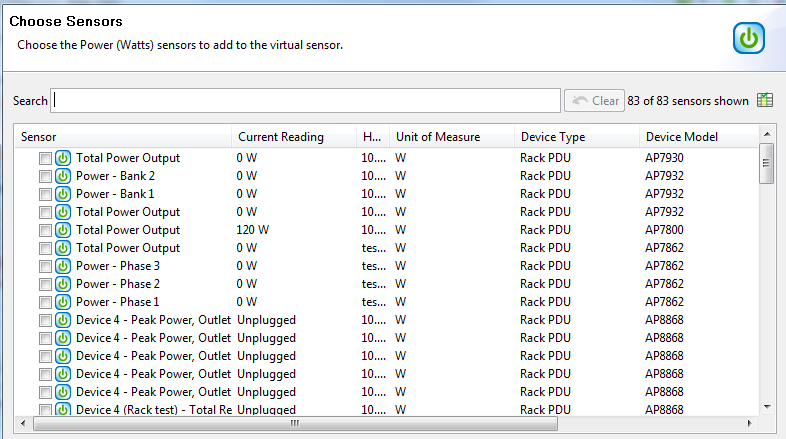 You then name it and choose a folder to put the sensor in. You'll have it listed in the folder itself as well as under virtual sensors 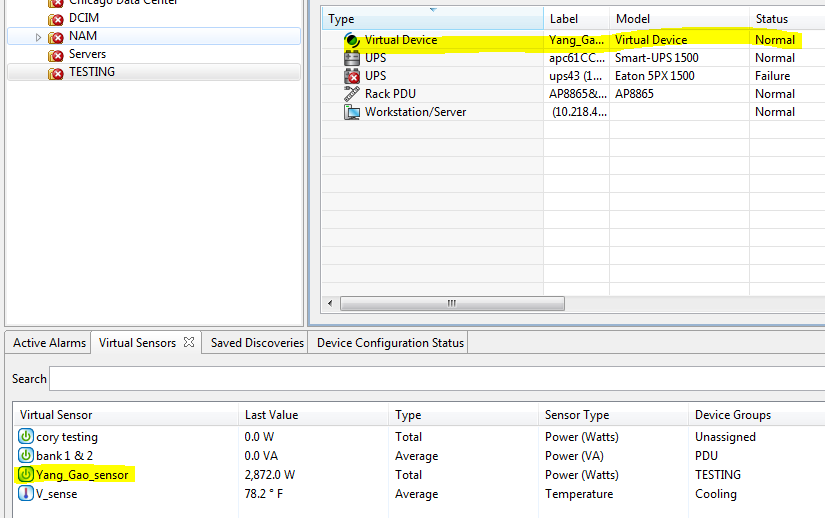 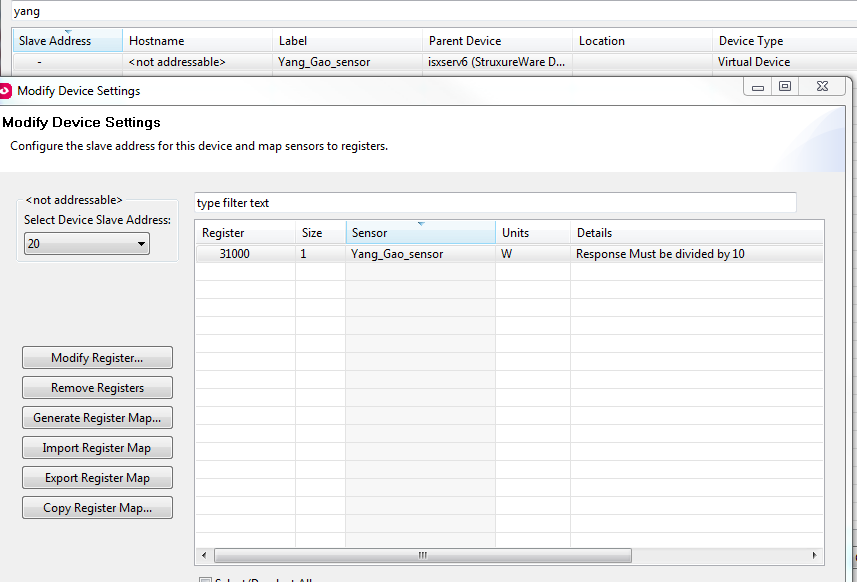 As noted previously, please remember there are only 247 potential slave outputs.

The virtual sensor is for sensors with numeric values.

In our case, we want to monitor ATS states which are not numeric values as below 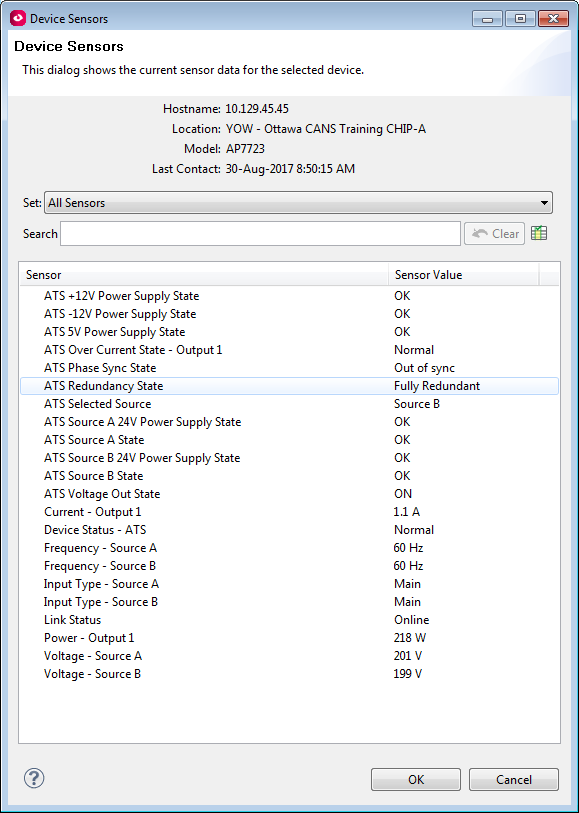 DCE may solve our problem if the virtual sensor can do logic operation on non numeric values.

You're correct, there is no option for a virtual sensor/device for state or to use multiple device sensors on a virtual sensor. I do not believe this is something they're looking into as they're likely looking to increase the number of output slave IDs first which would potentially cause less need for such a virtual device. IN any case, there is an option in the menu atop the EcoStruxure IT Help Center page under "resources" I believe where you can enter an enhancement request in your own words. Perhaps it's better that way so you can specify what you're looking for. Please note that such a request doesn't mean that the feature will make it into the product.

Is there a Schneider group or person whom we can contact and set up a meeting to discuss the requirement, implementation and cost share, etc? A group of people in my company are interested in such as features and would like to  discuss with Schneider.

I would suggest calling your local Schneider tech support or sales group as they would have a better idea on cost. Your local tech support can assist on technical issues.

As for the specific question on virtual sensors, each virtual sensor is it's own slave ID as I noted previously and they can not be combined.