Options
Solved Go to Solution
Back to EcoStruxure IT forum
Solved 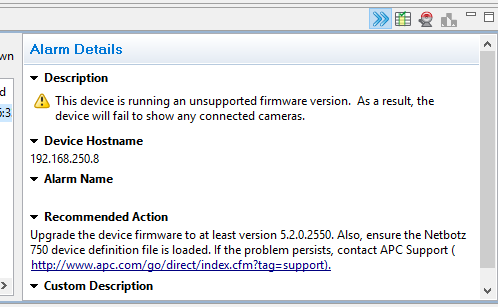 Has anyone a link to this version of FW as there is only 5.1 in the FW catalogue

It's simply that with 7.7 and 5.1, images are not yet supported. You will need 5.2 for that to work. IN the meantime as mentioned in the k-base FAQ, you will be able to poll and track SNMP values and alerts from the NetBotz 750.

This issue is outlined within the following knowledge base: https://www.apc.com/us/en/faqs/FA377507/

Firmware 5.2 for the NetBotz 750 is not yet available.

I'm also having this error trying to set the NetBotz 750 up in DCE. Is there any update on when the new 5.2 firmware will be released?

It's really close to release but we still don't have a confirmed date.

Not sure when it'll be on the web but local support personnel should have something they can provide.

It's simply that with 7.7 and 5.1, images are not yet supported. You will need 5.2 for that to work. IN the meantime as mentioned in the k-base FAQ, you will be able to poll and track SNMP values and alerts from the NetBotz 750.

Thanks for that do we have a date for release only I'm commissioning a DC and as it stands I'm handing it over with alerts on DCE!! its like giving them a Porsche and telling them they cant go over 30mph 😉

I know the break-in period on those cars are rough. =(

I totally agreed (and it's not like I have a say in the matter) but I was suggesting that they get this functionality into the product before the initial hardware release.

Sorry but I don't have an exact ETA. I last heard it was due out around the end of August but I don't believe that it's going to make that window at this point. I believe it's going to be some time in early September but if they run into an issue, it could push it back yet again...that's why the engineers and product management don't give exact ETAs because one little thing can push it back weeks or even months. I don't foresee that happening but for those reasons, we're not allowed to provide a firm release date.