I am trying to model a Cisco 9010 but have come across two issues.  First is the bay numbering.  It has 10 bays starting at 0 but two of the slots are named RSP-0 and RSP-1 and sit it what would be described as slot 4 and 5, picture below.  The bays are physically labelled on the chassis as 0-3, RSP-0, RSP-1, 4-7.  Is there anyway to rename the bay numbers? 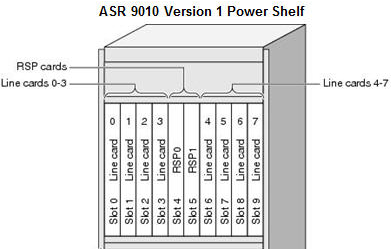 The second issue is this has modular line cards, so in slot two you could have two different modules.  The only option I can see is to have it as a half and full height chassis but this doubles the slot numbers resulting in 20 bays which is not correct.

Re: How To Rename Bays and Model a Modular Line Card on a Switch

Currently as you also experience it is not possible to model this exact model from Cisco.

I think you have found that it is possible to set the start numbering to 0 in the physical properties of the chassis.

Other than that it seems like you have tried the different combinations of half/full height.

We are aware of the missing modelling capabilities of some enclosure models and I will make sure this specific model is part of that.