What is going on here?

I have no way to measure power factor of the load but it looks like the PDU's might be taking into account power factor for the 240W readings but not for the 315W reading.  A load PF of 0.76 would account for this but it does not make sense that you should have 3 Real Power readings (W) that should be the same with different values.

Can this be corrected?

My theory above presumes the PDU can measure Power Factor, so why does Power Factor not get displayed in DCE?  It would be better to see PF in DCE if it is measured. 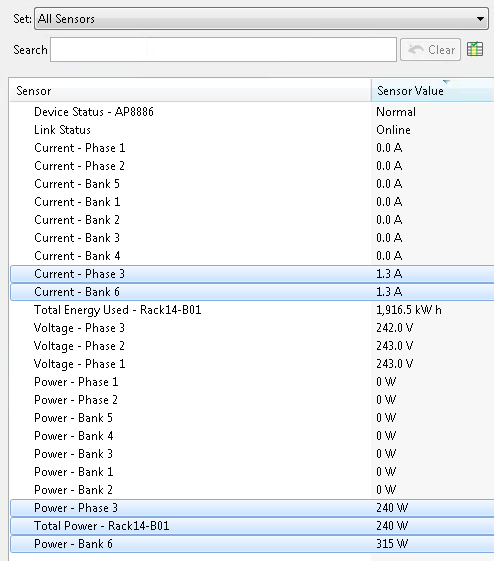 I just noticed that this is DCE 7.2.6 and that DCE 7.4.0 has a later version of DDF which does seem to return Power Factor, at least it does on an AP7953.  However it always reads 1.0, suggesting the PDU Gen 1 does not measure PF but assumes the PF to be 1.0 as well as the voltage assumed to be 230V?

If the customer is concerned about this and you can not do it, ask them to run the SNMPwalk of this device. The walk on the device is the only way to know for sure if these values are from the device or calculated in any way on the DDF. Please get the firmware rev of the device also as potentially if this is a device issue, it may be different in a different firmware.

As for the DDF version, they are updated regularly and I would expect a newer version of DCE to have a newer DDF. Since this is all in watts however (or listed in the image as such) neither the power on phase 3 or bank 6 should be changed by any power factor as they are both showing in watts and not VA. This again could be a DDF formatting issue but we need the data to be sure.

Also, based on the comment about different DDFs in  DCE 7.2.6 and DCE 7.4.0 specifically, do you have both on this same site? If you discover the same device on both, do these values appear differently?

As for values not showing up in the web interface specifically, that is not uncommon. Once we verify what we're looking at, we can potentially look into getting an enhancement request into the system should it not already exist and if the issue you're looking to change is getting that value on the web page. I need to know what the device is showing to tell you any more though.

Are you able to pull these values from the device directly using SNMP? If the device returns these same values, it would appear that the device or at least the NMC is reading / calculating these values and it's not DCE. If these values are not being shown in the SNMP output of the device then perhaps it is something in DCE. I'm also curious, what firmware is being used on the device(s)? I'm also assuming that bank 6 or at least the outlet that has load on it is 1 hot, neutral, ground and not 2 hots as only 1 phase is showing load.

Hi Steve. I only have limited access to the PDU's so cannot use "raw" SNMP to access them. The web interface however reports that Total Power is 0.24KW, Power Factor is 0.76 and Total Apparent Power is 0.31KVA, This equates well to the values above so it suggests to me that this is being reported by the PDU, unaffected by the DDF, and that DCE is receiving a KVA value for Bank 6. Unfortunately the web page does not seem to report the Real or Apparent Power per bank, only the current so I cant confirm if this value is derived from the PDU itself or from the DDF. The PDU is loaded with a single phase load L-N-E so yes 1 hot, neutral and ground. There is one load connected to bank 6 only.