Thanks so much! I am now a much happier human knowing this. I really thought it had to do with faulty wiring in my house.

The BR1500G and similar models normally indicate how much load is plugged into their battery backed outlets. If the unit is actually running from battery power, a battery icon will appear in the display window. When line power is normal, you will see a plug icon with the words "On Line" underneath it. See the example below.

If yours basically matches the example (the exact load percentage, rating in watts or VA, and how much of the two bar graphs at the top of the display are filled may vary), everything is OK.

If this is not what you are seeing, please tell us what characters are illuminated or take a picture. (The display is rather hard to photograph well. It tends to show up as very washed out, as I found when I tried to take a sample picture of a normally functioning unit just now.)

For BR1300G and BR1500G models, you will also hear a fan sound from inside the unit if it is really running on battery. (The fan may also run when a high load is attached to the unit or if the battery is charging.)

And just to be complete, here is an example of a unit that would be running from its battery. 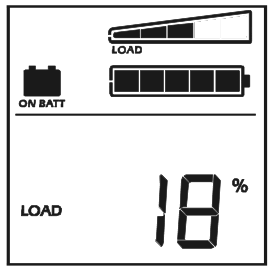 Thanks so much! I am now a much happier human knowing this. I really thought it had to do with faulty wiring in my house.